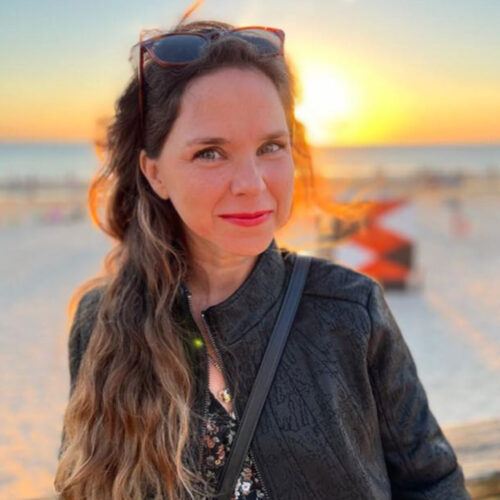 María Luján Oulton (Argentina/Spain) is a games curator, cultural producer and lecturer with a Master Degree in Communication and Cultural Creation by Walter Benjamin Foundation (thesis with honors in videogames curation).

Luján is dedicated to the promotion and divulgation of experimental and artistic videogames. She has been working over a decade bridging the art and games scene. She has been the director of Game on! El arte en juego (2009-2019) an artgames and playful media exhibit that ran in Argentina and had international popups. In 2019 she co-founded GAIA (Game Arts International Assembly) with Jim Munroe (Canada) a network + event for the gamearts ecosystem: game curators, event producers and community builders.

Luján has also experience working within the academic field as founder and co-editor of the Game Studies Journal at Universidad de Palermo (Argentina) which presents a yearly edition since 2019. She is also a member of the GameStudies group at IIEAC (Instituto de Investigación y Experimentación en Arte y Crítica).

In both areas she has always been committed to encouraging female participation in the industry. As such she is co-founder of Women in Games Argentina and currently working as their foreign ambassador in Spain.

Luján has given talks and participated in events such as TEDx Riodelaplata (Buenos Aires), Jorge Tadeo Lozano University (Bogotá), DevHourmx (Mexico City), DiGRA (Melbourne, Australia) among others. She has participated in publications such as:

All Sessions by María Luján Oulton