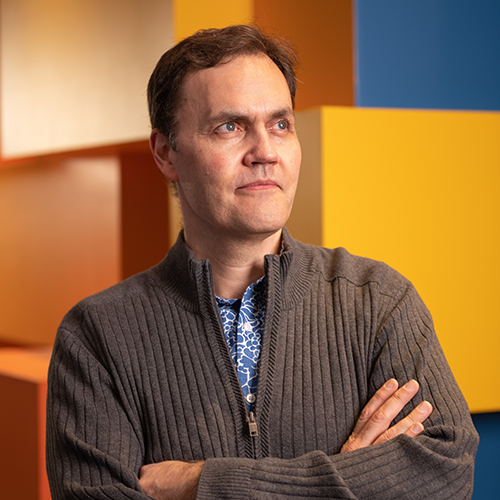 Jesse Schell is the founder and CEO of Schell Games. Since starting Schell Games in 2002, Jesse has grown it into the largest full-service educational and entertainment game development company in the United States. Under his leadership, Schell Games has produced an amazing array of innovative and award-winning educational and entertainment experiences, including the I Expect You To Die franchise, Happy Atoms, Until You Fall, and some of the most popular interactive theme park attractions in the world.

He is the author of the critically acclaimed book The Art of Game Design: A Book of Lenses. The book captured Game Developer magazine’s coveted “Front Line Award” for 2008. A third edition was released in 2019 to commemorate the 10th anniversary of the book.

Jesse also serves as Distinguished Professor of the Practice of Entertainment Technology at Carnegie Mellon University.

Jesse has worked on a wide variety of innovative game and simulation projects for both entertainment and education, but he is also known for his predictions about the future of gaming technology. Before starting Schell Games, Jesse was the Creative Director of the Disney Imagineering Virtual Reality Studio, where he worked and played for seven years as a designer, programmer, and manager on numerous projects for Disney theme parks DisneyQuest. He is a previous chair of the International Game Developers Association.

All Sessions by Jesse Schell